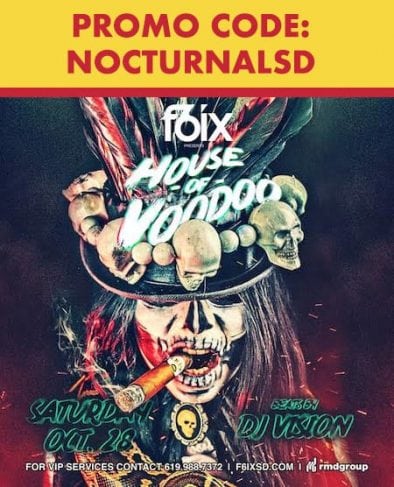 F6IX Gaslamp Halloween Party San Diego Discount Tickets Promo Code 2017. Located in the heart of Gaslamp District in San Diego F6ix is known for its hip hop, top 40’s pumping night club. If you want to dance and drop it like its hot, this event will be over the top.

— USE PROMO CODE NOCTURNALSD
Wherever tickets are sold!

Get Club VIP Tickets to F6ix hip hop club in Gaslamp District in San Diego. One of the most exclusive hip hop dance music night clubs in Gaslamp with DJ performances and special VIP events weekly. Make sure you get VIP bottle service tickets to this hip hop dance club.

F6ix Club Photos are available at:

The San Diego Guest List F6ix will be impossible to get on unless you have our promo code and signup early. This will be one of the most happening Halloween parties in San Diego in 2017. Top Halloween party Gaslamp District. Get on the guest list here: Guest List

Halloween Costume Prizes are going to be huge at the Gaslamp District. F6ix will be throwing one of the hottest top 40’s and hip hop music and will be top rated Halloween party 2017.

At F6ix you will enjoy a Haunted Halloween Party that will last all night. With special guests, famous DJs and costume parties, F6ix is one of the top clubs in Gaslamp San Diego.

Top Halloween Party in San Diego will be at the epic hip hop dance club, F6ix. This is where you go if you want to dance the night away.

— USE PROMO CODE NOCTURNALSD
Wherever tickets are sold!